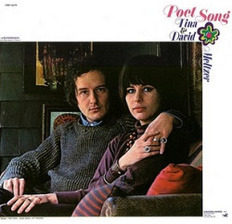 We made a lot of music together. In livingrooms, on stages, at parties, benefits, cutting contests. We loved music and the joy of creating it. It never mattered if anyone heard us, it was enough that we heard each other. Though we had different mentors they were all cut from the same hipster cloth. To create with love was the rule. Wallace Berman, a major postwar West Coast artist, announced the strategy: “Art Is Love Is God.”

We’d listen to records for the news, whether is was Ralph Stanley, Hank Williams, Lefty Frizzell, Billie Holiday, Doc Boggs, Mainer’s Mountaineers, Don Gibson, Jo Stafford, Flatt & Scruggs, Charlie Parker, Lennie Tristano, Django Reinhardt, Mavis Staples, The HiLos, The Abyssinian Gospel Choir, then John Coltrane, Jimi Hendrix, as well as Eddie Lang, Bix Beiderbecke, Robert Johnson….. Raised in the microgroove era, the LP was a potential sacred circle of revelation and transformation. When we played together we tried to recombine all the sounds we heard and wanted to hear in our improvisations. Most folkies thought we were crazy with some exceptions. Jim Gurley — who became Big Brother & the Holding Company’s lead guitarist — got it and sat in with us at Coffee Gallery hootenany jams. Dino Valenti thought we were nuts but wonderful; he introduced us to Dylan and David Crosby. We all played together in formal and informal encounters and combinations.

J.P. listened deeply into the soul of music. Rooted in heroic country and mountain music, Don Gibson was as profound as Mavis Staples, Ralph Stanley as pure as Ray Charles. If Earl Scruggs was J.P.’s Heifetz, Mainer’s Mountaineers were the downhome Budapest String Quartet. He was generous and exacting in his reception of music. Heart (or duende) counted as much as chops (or technique). J.P. went to music as we all did, to be moved, transformed, elevated, and realized. He loved Django Reinhardt as much as Charlie Parker; the Louvin Brothers as much as the HiLos; Hank Williams was kin to Robert Johnson. The awesome moment of “Dark As The Night” ululated by Blind Willie Johnson. Charlie Parker’s hummingbird fury of ideas. We shared revelations from immediate and obscure LPs, 45s, 78s, becoming weird secular scholars of Mystery; burrowing Talmudic xrays going into the music’s deep weave.

J.P. exuded such an abundance of the possible and succumbed to the impossibility of realizing it. He was a natural and gifted writer; a profound musician. Irregardless of the fuel, the drugs, they tapped into a core of creative energy that sought release, expression. We realize our prison only after we design it and move in.

I remember his enthusiasm, desire, and struggle to be an Artist. What reverence and hope he gave that word. How he struggled to make it clear to himself and others. Caught in the butterfly net of Romanticism’s heroic self, that utterly unique transcendent creator Promethean archetype of doubt & desire.

We just wanted to play, to make music, to jam, to improvise and realize; we could’ve never left the livingroom or stage as long as we could make music. There’s something wondrously liminal about improvisation. We participated in the spontaneous with absolute faith. To ‘play’ music; a game of being and becoming; moment-to-moment moves, noticing each subtle change, chord shift and rhythmic accent and accident. Intense attention and focus, paradoxically mindless and mindful.

So much to remember, so much already forgotten. One exultant memory comes to mind. Tina, J.P. and I were hired for a New Year’s gig on a Sausalito houseboat. Tina was hugely pregnant with our first daughter, Jenny. We both played guitars and J.P. his banjo and ran through our repertoire of folksongs, Carter Family stuff, classic country oldies, and clog-stomping bluegrass tunes. After the chimes struck midnight and we did too many choruses of “Auld Lang Syne,” the party got serious. R & B and rock LP’s were stacked on the phonograph and began pumping out of the huge floor speakers attached to our rich Boho hosts’ stereo-system. I remember J.P. and Tina doing the Bop and Lindy with boggling exuberance and skill. The partygoers – as in a movie musical — gave them room, formed a circle around them, and J.P. and Tina, dome belly pushing through the taut fabric of her shift, showed everyone how it’s done.